Overview of control systems in refineries 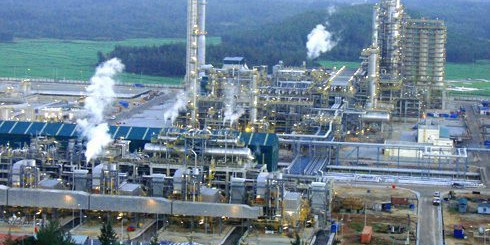 The collapsible control is an automatic control system commonly used for assembly plants. In the chemical industry in general as well as in the oil refining and gas processing industry in particular, open and close control is not common, but also indispensable and plays an important role, especially in applications. start up, shutdown, factory safety.

The inputs and outputs of this control type are only in one of two open or on (on or off) state. The control method of this type is logic, with OR, AND, NAND gates etc. 40 years ago the controller of this type was a system of relays and time relays placed in a panel cabinet. With the development of the electronics industry, a controller capable of programmable PLC (Programmable Logic Control) was born, making the relay system obsolete.

The input device is usually from transducers that output standard analogue signals such as 4-20 mA or 3-15 psig. The usual output devices are control valves. Control method is usually the control algorithm (Proportional), Integral (Integral) and Differential (Differential) abbreviated as PID. [3]

Due to the fact that many factories are scattered in a large area and there are many inputs and outputs for each workshop, most of the refineries today use DCS distributed control systems ( Distributed Control System). The system is composed of many smaller systems scattered in each workshop, each of these small systems is responsible for ensuring the control process at the workshop it is in charge of, it is under the management of the systems. host above, can receive or provide signals to host systems. These dispersing systems themselves will directly manage field devices such as valves, sensors, motors, etc.

Gather all the data from the distributed systems in each plant to be sent to higher level systems, which are usually centralized in the central control room of the plant, where the engineers Operators and managers directly make decisions about the operating mode of the plant.

Established in the mid-70s, the DCS distributed control system has brought a real revolution to the central control rooms of the refineries by digitizing control rings and information representation of process to the monitor screen.

The advantages that DCS brings can be mentioned as:

This is the traditional method of controlling a process. The content of the method is to measure the process variable PV (Process Variable) and compare it with the set value SP (Setpoint), based on the deviation e = SP - PV, the controller will give the signal. corresponding control changes the valve opening.

Most industrial simple control loops use this control ring.

Serial control is a control technique that uses two controllers inside a control ring. One controller is nested in another controller, the output of the first controller is the set point SP (Set point) of the second controller. This means that the two controllers are not independent but are linked together in order to control the process variable PV (Process Variable) to reach the desired SP value.

Serial control can improve the responsiveness and achieve process control, especially for those with a significant delay, or the response time of the first controller. very big. The picture below is an example of a conditioning system with TRC on sensitive plates and a product quality control system. 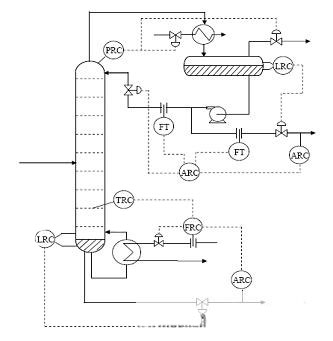 Feed forward control is also called early control technique, with this technique, the control device will measure the disturbance affecting the process and react accordingly. This means that the quality of the control process will be significantly improved as the noise variable will not have an impact on the system, it has been pre-measured and controlled by the controller.

Use case is Feed forward

Although there are significant advantages of eliminating the effects of noise affecting the process, not all processes are able to implement this Feed forward control technique.

Since the nature of this control is to react against noise before it affects the process, it is important to know information about the noise, which is:

Without these two information, the Feed forward control technique will not work.

The example below is a feed forward control system to regulate the operation of a 2-product distillation tower using TRC on the sensitive plate, affecting the capacity of the reheating device when the material changes.

Combination of Feed back and Feed forward

This is the method most commonly used in industrial control loops. To explain the benefits of this combination, we study the following control scheme for the purpose of controlling output concentration.

Comparing with the diagram in Figure 1.4 without the feedback stage, it is found that when there are disturbances such as the temperature or the concentration of the material flow, the control quality will not be high. The incorporation of the Feed back control ring improves the quality of the control significantly, even in the case of disturbing effects of temperature or material flow concentration.

This is a modern control technique thanks to the advancement of computational techniques.

With a computer, a simulation of the entire control process can be performed. This model can compute outputs for control valves and other actuators.

Selective control is a control technique in which the tuning variable can be controlled by one of many different process variables.

The illustration below shows the main control variable, which is the flow rate of heat through the Reboiler that can be controlled via the liquid level or the bottom of the tower. Here we will analyze this carefully. 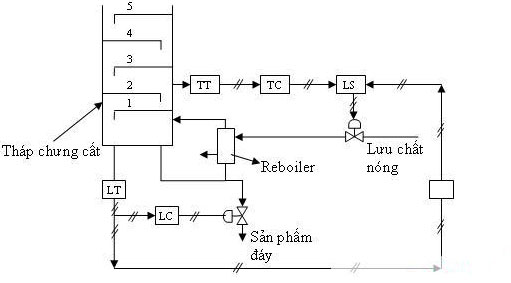 In practice there are many cases where the control loop takes in data from many process variables.

The most common application of this control technique is in startup or factory shutdown.