Cool the generator with hydrogen gas 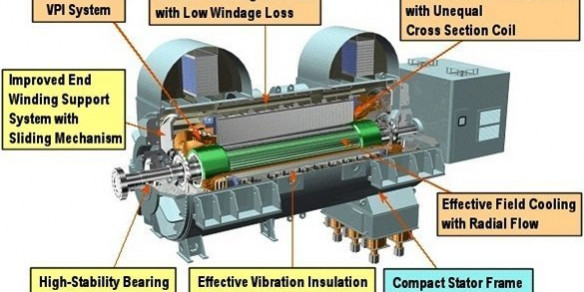 The exciter itself can be directly attached to the rotor of the synchronous machine (the electric exciter of direct current or alternating current, thanks to which they create independent excitation systems, exciters do not have Brush). Self-excitation systems with controlled semiconductor or ion-type converters receive their supply from the stator primary or secondary windings.

When current passes through the conductors and alternating flux is present in the steel core, heating losses will occur in the steel core. For cooling the machine requires a forced blower device because the natural cooling effect is not enough.

Cooling-based steam turbine generators are divided into air, hydrogen gas and liquid (water, oil) or a combination of air-cooled machines.

The increase in generator capacity is initially accomplished by increasing the size. That continued until the mechanical loads of the various elements on the rotor (belt, wedge etc.) reached limit values. Continued increase in generator capacity is achieved primarily by increasing the current density in the windings and enhanced cooling. However, with the increase in capacity, the fan losses and friction between the rotor and the air increase sharply, so it is necessary to switch to direct cooling of the windings and steel cores of the generator.

The advantages of hydrogen cooling: thanks to the density of hydrogen which is nearly 10 times smaller than that of air, its thermal conductivity is 7 times higher than that of air. The use of hydrogen cooling allows to increase the generator capacity by 35 - 40% compared to air cooling (same generator size), increasing the efficiency by 1% or more, increasing the life of the machine. For example, for a generator with capacity of 100 MW, 3,000 rpm, when cooled with hydrogen, it increases efficiency 1.2%; with a 200 MW air-cooled generator, ventilation losses are 1,195 kW, while hydrogen cooling is less than 140 kW.

Hydrogen cooling applications for generators were first carried out in the US in 1923. Hydrogen cooling systems were then tested on a series of synchronous generators and compensators. capacity was large and it was only from 1936-1938 in the United States that hundreds of megawatts of high-capacity steam turbine generators began to be built with hydrogen-cooled systems.

In generators with hydrogen cooling the inner cavity is sealed away from the outside so there is almost no oxygen in it. Under such conditions, the generator does not need to be equipped with flame retardant equipment (because hydrogen does not maintain the burning).

The increased moisture content of hydrogen adversely affects the insulating state and mechanical strength of the rotor belts, creating corrosion on the steel core ... so it is necessary to maintain the moisture content of hydrogen in the body not exceeding 12-13. g / m3 with operating values of pressure and temperature of cold hydrogen gas, which corresponds to 30 - 40% relative humidity.

Generators with unit capacity from 300MW to 1,200 MW (even up to 1,500MW) have their own stator cooling system (with distilled water in the stator's hollow conductors) and hydrogen cooling for the rotor.