An effective solution for reducing Manganese in water

You are here:
Country 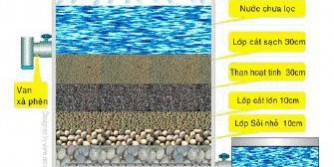 Manganese usually exists in parallel with iron in groundwater. Like iron, manganese is usually present in groundwater in the form of Mn2 + ions, but with a relatively low concentration, rarely exceeding 5mg / l. However, with a manganese content in water greater than 0.1mg / l, it will be dangerous to use, just as in the case of high iron content.

The basic technological process is the same as de-iron including precipitation, contact sedimentation and filtration. As for the filtration part, due to the slow oxidation of manganese, the filter sand layer must have a thickness of 1.2 - 1.5m. The leaching procedure must be selected on an experimental basis precisely, in order to retain a membrane of Mn (OH) 4 around the filter sand as a catalytic film for the next cycle. If the sand grains are washed off, in the following filtration cycle, it will take time to create a new catalytic film (usually 5-10 days). For high efficiency, filter media should use black sand (coated with manganese dioxide).

Using strong oxidizing agents such as chlorine, ozone, KMnO4 to oxidize Mn2 + to Mn4 +. Chlorine oxidizes Mn2 + at pH = 7 for 60 - 90 minutes chlorine dioxide (ClO2) and ozone (O3) oxidize Mn2 + at pH 6.5 ÷ 7 for 10 - 15 minutes. To oxidize 1mg Mn2 + requires 1.35mg ClO2 or 1.45mg O3. If there are ammonium compounds in water, the oxidation of Mn2 + by chlorine begins only after chlorine combines with ammonium into chloramine and in the water there is a residual free chlorine. KMnO4 oxidizes Mn2 + in all existing forms (including colloidal, organic) to Mn (Oh) 4.