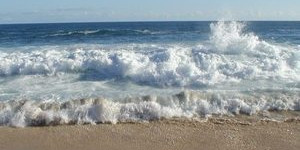 As the demand for energy increases around the world, we need to make newer and better discoveries of energy resources. One of the most untapped resources until now is energy from the ocean and ocean waves. The advantage of this resource is that it is completely natural, green and does not cause pollution. Wave energy emerges as the "wave" of ideas for energy production. Here are five innovative designs to harness the power in ocean waves. 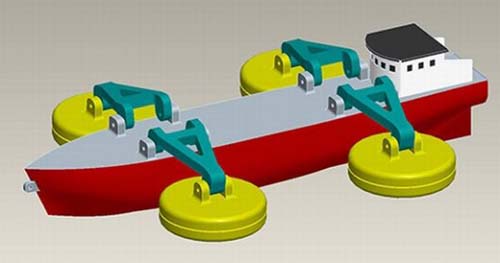 The traditional wave energy extraction system is a permanent structure in the sea. Therefore, it must be built to withstand enormous stresses. Through the idea of a boat going to sea fishing and turning to shore, the Fraunhofer system will return to the port after harnessing energy from the waves. The floating buoy hanging on the arm of the hull is 50m long that rises and falls with the movement of the waves. This movement will be generated electricity and stored in an onboard battery system. In the event of a storm, all accompanying appendages simply disconnect and stow them securely.

It is estimated that this system can provide about 20 MWh of electricity at a cost of 15 cents per kWh. 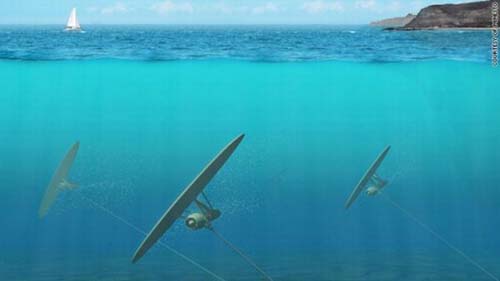 Instead of putting energy extraction systems on the water, which is 8-14 meters long, the underwater kite promises to use a combination of wind and waves. These kites have rotors that rotate when the tide passes. Just as a yacht collects momentum and speed by cutting through winds, the kite's downward motion amplifies the water speed by up to 10 times. The kites have been designed with medium buoyancy to keep them afloat and have a lid to protect the turbines from marine fish.

When deployed in waters between 50 and 300 meters deep, these kites promise to generate around 150-800kW of electricity, depending on location and size.

3. Floating solar cells in the sea 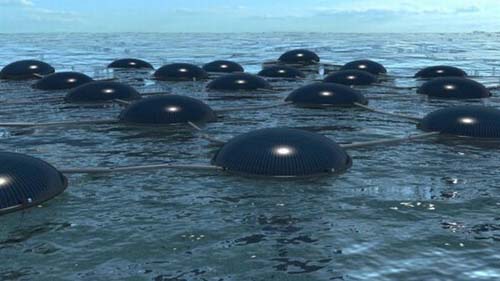 This is a hybrid generator using solar energy and wave energy. The buoys are fitted with solar-powered photovoltaic systems and the natural buoyancy absorbs the energy of the waves.

Using this natural light and natural buoyancy increases 20% of the energy obtained compared with only one deployed at a time. 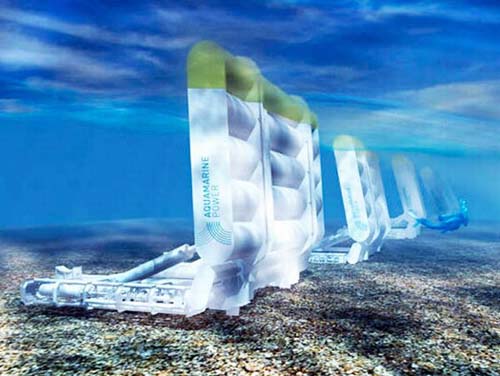 We will call this invention the 'jewel' of creation. Oyster is a giant movement, shaped like an oyster resting on the ocean floor and the sea floor. The device uses hydraulic technology, it converts wave energy ashore into electricity. The width fluctuates about 18 meters, fitted with piston. It is activated by waves and pumps water through an undersea pipe.

According to preliminary research, 10 oyster-style devices can supply the electricity needs of 3,000 households. The 'green' nature of the generator guarantees savings of nearly 500 tons of carbon annually. 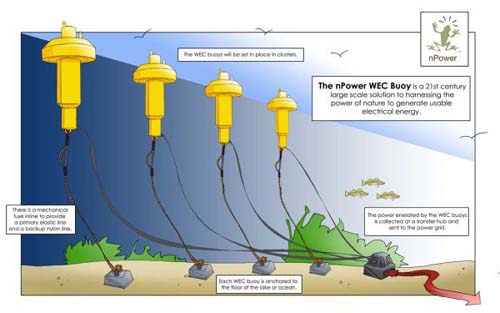 It is similar to how water kites work. The system is anchored to the ocean floor and floats float on the surface. The undulating motion generates electricity through the turbines. The buoys will be installed in clusters and in order.

The generator is rated to be quite commercially viable. Founder and chief executive officer, Aaron Lemieux said, “These generator clusters will compete with coal-based power plants. Electricity will be very cheap and will cost only about 5 to 7 cents per kilowatt hour. ”

When it comes to wave energy one refers to the costs involved. These are the production and installation costs of generating electricity from waves, be it underwater or on the surface of the water. One challenge is that equipment is susceptible to rust and corrosion. In contact with salt water, the risk of spoilage is very high. Equipment, when manufactured, needs to be able to withstand extreme weather and storms. Freshwater installations (as in lakes) may not be subjected to extreme corrosion but they also require certain requirements prior to installation. It is feasible to install the system in parts of the world such as the west coast of the US and the coasts of South Africa, Chile and Australia. If not, the cost may outweigh the profit.